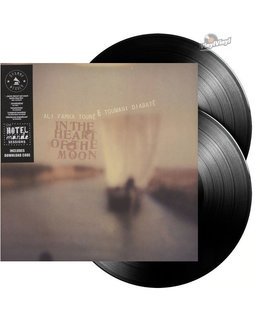 2012 EU issue 2xLP 180g vinyl =In the Heart of the Moon is a summit meeting between two world music giants guitarist Ali Farka Toure and master of the korathe 21string gourd harptoumani Diabate It is the first newly recorded work...

2012 EU issue 180g vinyl 2LP=In the Heart of the Moon is a summit meeting between two world music giants guitarist Ali Farka Toure and master of the korathe 21string gourd harptoumani Diabate. It is the first newly recorded work from either artist in five years and their first albumlength collaboration. More an eloquent indepth dialogue than a jam session In The Heart Of the Moon was recorded during three unrehearsed improvisatory twohour sessions at the Hotel Mande on the banks of the Niger river in Bamako Mali. A thrilling display of profound musical play from two of Malis greatest stars. The Independent

In the Heart of the Moon is a duet recording by Malian guitar slinger Ali Farka Toure and Mandé lineage griot Toumani Diabate on kora. There are a few other players who contribute percussion here and there, and Ry Cooder plays a Kawai piano on a couple of tracks and a Ripley guitar on one, but other than these cats, this is a live duo set without edits or enhancements of any kind.

There were three sessions in the conference room of the Mande Hotel in Mali, the first of which was on the eve of Farka Toure being elected mayor of his town, Niafunké. Most of the music here dates back to the Jurana Kura (translated as new era) cultural movement, which was part of the independence struggle in the 1950s and early '60s. The music created by the Jurana Kura for the guitar created a entirely new style of rhythmic fingerpicking. For those familiar with Farka Toure's blazing lead style, this disc may come as a shock. While he does solo many times here, he is also playing in balance with Diabate, whose kora has the larger lyric and harmonic palette, so he is in a supporting role. It doesn't matter. Whether the song is "Kaira" (written and performed by Diabate's father in the '50s and the earliest recorded track on the album, from before the Mande sessions), "Ai Ga Bani (I Love You)" and "Soumbou Ya Ya" (both written for young people during the Jurana Kura), or one of Farka Toure's originals near the end of the set, such as "Gomni," the style is the same. Everything echoes this earlier era because it has informed all Malian and Guinean music since. The purpose was to make people aware not only of its existence but to inspire and exhort. The music is insistent but not strident. It contains a gentleness and tenderness that seem to drip from the region, one of the poorest in the world. The players' focus and intensity are captured, but they make it all come off so easily that the listener gets lost in the pleasure of these gorgeous melodies and the call-and-response style of interaction between the players.

Simply put, In the Heart of the Moon is nothing short of remarkable, and one of the best offerings World Circuit/Nonesuch have ever released.