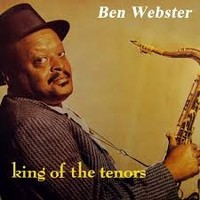 Ben Webster (1909 - 1973) a.k.a. "The Brute" or "Frog", was an influential American jazz tenor saxophonist. Webster, born in Kansas City, Missouri, is considered one of the three most important "swing tenors" along with Coleman Hawkins and Lester Young. Known affectionately as "The Brute", he had a tough, raspy, and brutal tone on stomps (with his own distinctive growls), yet on ballads he played with warmth and sentiment. Stylistically he was indebted to alto star Johnny Hodges, who, he said, taught him to play his instrument.

BEN WEBSTER - The Horn = 2LP = from the original tapes

( 1944 ) 2019 US reisse on 180 gram HQ vinyl 2LP - The Horn is an essential release for any Ben Webster fan! A real treat, the compelling 17-track 2LP affair is comprised of studio session tracks, along with their false starts, alternate takes, and outta

( 1959) - 2010 EU reissue on 180g LP- 1959's Ben Webster Meets Oscar Peterson, not only a definite first-disc choice for Webster newcomers, but one of the jazz legend's all-time great records." this album brings together two of the greatest stylists in A