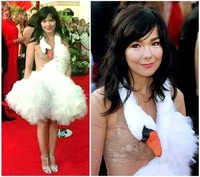 Björk (1965 -) is an Icelandic singer and songwriter. Björk is the former lead singer of the alternative rock band The Sugarcubes, and since 1993 has a solo career under the name Björk.

Björk is known for its interest in a wide variety of musical genres, including pop, jazz, alternative rock, electronic and classical music. Her record label One Little Indian in 2003 reported that Björk has sold worldwide.

( 1995 ) - 2020 EU reissue vinyl LP edition =delivered in 1995 with the masterpiece "Post." A darker and more mature album than its predecessor, Post is a wonderfully epic album that revived the music scene from a deadly overdose of dance garbage and manu

One of the best albums of the nineties

( 1993 ) - 2016 EU reissue 180g vinyl LP-Her first recording following the dissolution of her previous band the Sugarcubes, the album departed from the rock-oriented style of her previous work and instead drew on an eclectic variety of styles across elect

(2007 ) 2016 EU reissue 180g vinyl 2LP+download -After a decade of wide-ranging experimentation Björk bridged the gap and brought the beats back on her sixth full-length, Volta. Heavy on full-bodied tribal rhythms, driving horns and found-sounds, the elec

( 2004 ) - 2016 EU reissue on 180g 2LP=Includes the riveting numbers "Oceania," "Pleasure Is All Mine" and "Where Is The Line." Björk changed gears once again on the trailblazing Medulla which was built entirely around the human voice and a cappella arran