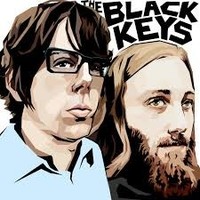 The Black Keys is an American bluesrockduo, founded. By Dan Auerbach (vocals and guitar) and Patrick Carney (drums) in 2001 in Akron (Ohio) At performances they are accompanied by Gus Seyffert (bass guitar and backing vocals) and John Wood (keyboards, guitar, percussion and backing vocals) since 2010.