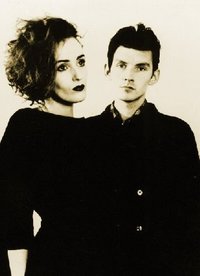 (1996) - 2017 EU reissue on 2LP -SpiritchaserDead Can Dance's 7th album, was the final studio album the band released with 4AD (it was to be another 16 years until they reconvened to make their eighth, Anastasis).

(1988) 2017 EU reissue on 180g 2LP - Dead Can Dance's fourth album, The Serpent's Egg came during a prolific period for the band, being released just four years after their debut. It was also the first they made at their own studio which, according ...

DEAD CAN DANCE - Toward The Within =2LP=

DEAD CAN DANCE - -Into The Labyrinth

2016 EU repressed on 180g 2LP- Dead Can Dance’s studio 1993 masterpiece Album an Ethereal Gem of Ethnic Fusion. Just as Dead Can Dance were utterly distinctive, so too, is the group’s Into the Labyrinth, the scintillating 1993 album that catapulted t...

DEAD CAN DANCE - Within The Realm Of A Dying Sun

2016 EU reissue on 180g LP = their 3rd album Within The Realm Of A Dying Sun(1987), showing both a continued maturity in their sound and rise in their popularity. Recorded during an intense period of musical and personal growth for the band, the albu...

DEAD CAN DANCE - Spleen And Ideal

( 1985 ) 2016 EU repressed on 180g LP-Dead Can Dance's 2nd album, Spleen And Ideal saw them experiment more with instrumentation, abandoning guitars in favor of cello, trombone and timpani. Widely acclaimed, there was now a richness of unification...

DEAD CAN DANCE - Dead Can Dance

2016 EU repressed on 180g LP- the debut album from the Australian duo of Lisa Gerrard & Brendan Perry, On their eponymous debut album in 1984, Dead Can Dance successfully harnessed a bewitching barrage of sounds, layering grinding guitars and even a ...