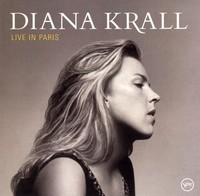 2016 EU repressing on standard vinyl LP=Diana Krall’s beloved holiday album, Christmas Songs, is now available back on vinyl.=Diana Krall sings like she truly loves the holidays and holiday songs On this beautiful production by Tommy LiPuma and Al Sc...

(2001)2016 EU reissue on 180g 2LP- The Look of Love, wonderfully showcases Diana's mastery as a vocalist and pianist here. From the smoky rendition of "Cry Me A River," to the heartbreaking tenderness of "I Get Along Without You Very Well," to the Spanish

2015 EU reissue on 180g 2LP -New Album of Popular Songs from the 1960's to Present Day. Includes Songs by Bob Dylan, The Eagles, Elton John, The Mamas and the Papas & Paul McCartney=Musically speaking, Diana Krall is no Wallflower. By any s...

2007 Verve EU 2xLP-most popular female Jazz artist of her age, this collection feats: "You Go to My Head", "The Heart of Saturday Night" and "Only the Lonely", "The Look of Love", "Lets Face the Music" and "Dance Fly Me to the Moon" 'Ea...

(2009)2016 EU reissue on 180g 2LP-Diana's 12th album Quiet Nights, inspired by a 2007 trip to Brazil and originally issued in 2009, is an intimate recording of ballads and bossa nova numbers from the same team that brought you her best-selling Grammy Awar

(2004) 2016 EU reissue on 180g 2LP-The Girl in the Other Room, the first album by the acclaimed artist to feature her own original compositions, was originally released on Verve Records in 2004. The record, Krall's eighth overall, includes six songs co-wr

2020 EU issue on 140g 2LP = Self-Produced New Album Culled from Last Sessions with Longtime Creative Partner Tommy LiPuma; Mixed by Al Schmitt Who Worked Closely with Krall to Achieve a Particular Intimacy and Immediacy to Her Voice in the Sonic Balance