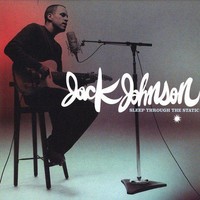 Jack Johnson (1975 - ) is an American singer-songwriter, musician, actor, record producer, and former professional surfer. Johnson is known primarily for his work in the soft rock and acoustic genres.

JACK JOHNSON - - In Between Dreams

2005 EU issue on standard LP=in gatefold Sleeve- In Between Dreams marks Jack Johnson’s third album and is his most musically upbeat yet, no doubt inspired by the delight of becoming a father. However, as we have come to expect from Jack, he never le...