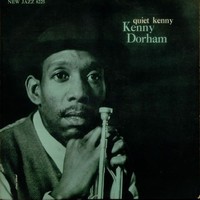 Kenny Dorham (1924 – 1972) was an American jazz trumpeter, singer, and composer born in Fairfield, Texas. Dorham's talent is frequently lauded by critics and other musicians, but he never received the kind of attention or public recognition from the jazz establishment that many of his peers did. For this reason, writer Gary Giddins said that Dorham's name has become "virtually synonymous with underrated." He also composed the jazz standard "Blue Bossa," which first appeared on Joe Henderson's album Page One.

( 1960 )- 2013 EU reissue 180 g vinyl LP -Composer of “Blue Bossa”, one of the most popular jazz standards of all time, trumpeter Kenny Dorham was a rather neglected and little known figure during his lifetime. Decades later, not much has changed. Greatly