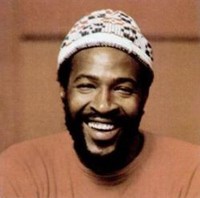 Marvin Gaye (1939 – 1984) was an American singer-songwriter and musician.Gaye helped to shape the sound of Motown Records in the 1960s with a string of hits, including "How Sweet It Is (To Be Loved By You)" and "I Heard It Through the Grapevine", and duet recordings with Mary Wells and Tammi Terrell, later earning the titles "Prince of Motown" and "Prince of Soul". During the 1970s, he recorded the concept albums What's Going On and Let's Get It On and became one of the first artists in Motown to break away from the reins of its production company. Gaye's later recordings influenced several R&B subgenres, such as quiet storm and neo-soul.

Following a period in Europe as a tax exile in the early 1980s, Gaye released the 1982 Grammy Award-winning hit "Sexual Healing" and the Midnight Love album.

He was fatally shot by his father, Marvin Gay, Sr. on April 1, 1984 at their house at 2101 South Gramercy Place in Western Heights in the West Adams district of Los Angeles. Since his death, Gaye has been posthumously honored by many institutions, including the Grammy Lifetime Achievement Award and the Rock and Roll Hall of Fame.

( 1971 ) 2010 EU reissued on 180g vinyl LP +download= heralded as one ofthe greatest albums ever made soul music or otherwise, Marvin Gaye's landmark 1971 recording What's Going On is one of the most important and passionate soul records ever made and it

1978-2016 EU reissued180g 2LP + download - Here, My Dear is the fifteenth studio album by Marvin Gaye. The album was hailed by music critics as one of Gaye's best produced albums in the years following his death. The front cover features a painting of Gay

( 1961 ) 2015 EU reissue 180g vinyl LP+download -Marvin's rare debut album, The Soulful Moods Of Marvin Gaye, featured what he loved to sing most: American standards from "My Funny Valentine" to Cole Porter's "Love for Sale." It's unlike anything he's be.