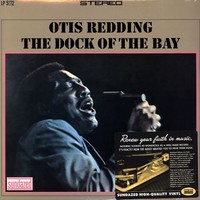 Otis Redding (1941 – 1967) was an American singer-songwriter, record producer, arranger and talent scout. He is considered one of the greatest singers in popular music and a major artist in soul and rhythm and blues. His singing style was powerfully influential among soul artists of 1960s.

(1965) - 2012 EU Stereo reissue 180g blue vinyl LP -Considered by many soul connoisseurs to be Otis Redding's finest and most fully realized LP. This was recorded just before his untimely death but he lives on in thi...

2018 EU issue vinyl LP-The 12-song DOCK OF THE BAY SESSIONS collection was compiled with input from Roger Armstrong of Ace Records and Otis biographer Jonathan Gould and has the Redding family’s full endorsement. Although the individual tracks have been p