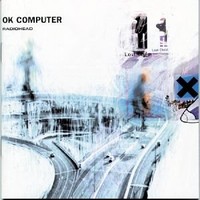 Radiohead released their debut single "Creep" in 1992. It became a worldwide hit after the release of the band's debut album, Pablo Honey (1993). Their popularity rose in the United Kingdom with the release of their second album, The Bends (1995). Radiohead's third album, OK Computer (1997), propelled them to international fame; featuring an expansive sound and themes of modern alienation, OK Computer is often acclaimed as one of the landmark records of the 1990s ] and one of the best albums of all time.

Kid A (2000) and Amnesiac (2001) marked a dramatic evolution in Radiohead's musical style, as they incorporated experimental electronic music, krautrock and jazz influences. Hail to the Thief (2003), a mix of piano and guitar rock, electronics, and lyrics inspired by war, was the band's final album for their record label, EMI. Radiohead self-released their seventh album In Rainbows (2007) as a digital download for which customers could set their own price, to critical and chart success. Their eighth album, The King of Limbs (2011), was an exploration of rhythm and quieter textures, and was also self-released.

Radiohead have sold more than 30 million albums worldwide. Their work places highly in both listener polls and critics' lists of the best music of the 1990s and 2000s. In 2011, Radiohead were ranked the third best British artists of all time by Paste, below only the Beatles and the Rolling Stones. In 2005, they were ranked 73rd in Rolling Stone's list of "The Greatest Artists of All Time"; Jonny Greenwood (48th ) and O'Brien were both included in Rolling Stone‍ 's list of greatest guitarists, and Yorke (66th ) in their list of greatest singers.  In 2009, Rolling Stone readers voted the group the second best artist of the 2000s

( 2000 ) - 2016 reissue For the First Time on 180g 2xLP ="Kid A" sees Radiohead as a band at the peak of their powers. “How to Disappear Completely,” “Optimistic,” “Idioteque”,“The National Anthem,” “Morning Bell”. Kid A initially proved to be controversi

(1997) - 2016 EU XL reissue on 180g LP +download - Radiohead's third album. Produced by the band and Nigel Godrich, the album features the singles “Paranoid Android,” “Karma Police,” “Lucky” and “No Surprises,” and is widely cited as one of the greatest

( 1993 ) - 2016 EU Reissue the debut 1993 album by the English alternative rock band Radiohead= with theire hits:"Stop Whispering" "Anyone Can Play Guitar" and surprise hit "Creep." Radiohead was clearly years ahead of their time even at these early stag