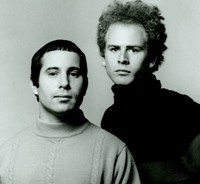 Simon & Garfunkel were an American music duo consisting of singer-songwriter Paul Simon and singer Art Garfunkel (both born in 1941). They formed the group Tom & Jerry in 1957 and had their first success with the minor hit "Hey, Schoolgirl". As Simon & Garfunkel, the duo rose to fame in 1965, largely on the strength of the hit single "The Sound of Silence". Their music was featured in the landmark film The Graduate (1967), propelling them further into the public consciousness.

Their sometimes rocky relationship led to their last album, Bridge over Troubled Water, being delayed several times due to artistic disagreements, and as a result the duo broke up in 1970. It was their most successful album worldwide to date, reaching number one in several countries, including the United States, and receiving 8× platinum certification from the Recording Industry Association of America, making it their highest-selling studio album in the U.S. and second-highest album overall. Simon & Garfunkel have, at times, reunited to perform and sometimes tour together. They have done so in every decade since the 1970 breakup, most famously for 1981's "The Concert in Central Park", which attracted more than 500,000 people, making it the 7th-most attended concert in the history of music.In 2004, they were ranked No. 40 on Rolling Stone's list of the 100 greatest artists of all time.

2018 EU reissue on 180g VINYL LP = Sounds of Silence(1966) is the second studio album by Simon & Garfunkel, The album's title is a slight modification of the title of the duo's first major hit, "The Sound of Silence". The song had earlier been released i.

( 1982 ) - 2017 EU reissue on 180g 2LP =With classics "The Sound of Silence", "Mrs. Robinson", and "The Boxer". Their first live album with hit songs from their years as a duo and their solo and duo careers, and covers. Among the songs performed were t

( 1980 ) 2020 EU reissue blue vinyl LP - Fifth studio album by the American singer-songwriter. The album is best known for the Grammy-nominated track 'Late in the Evening' which was a hit for Simon in 1980, peaking at No. 6 in the United States. The al

( 1973 ) 2017 EU reissue 180g vinyl LP - 3rd solo studio album by American musician Paul Simon . It contains songs covering several styles and genres, such as gospel ("Loves Me Like a Rock") and Dixieland ("Take Me to the Mardi Gras").

1968 - 2017 EU reissue on 180g vinyl LP =featuring Paul Simon has said this is the quintessential Simon and Garfunkel album. including the classics 'America', 'Hazy Shade Of Winter' and 'Mrs Robinson'.