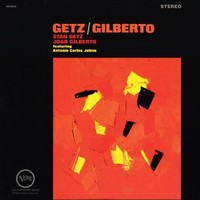 Stanley Getz was an American jazz saxophonist. Playing primarily the tenor saxophone, Getz was known as "The Sound" because of his warm, lyrical tone, his prime influence being the wispy, mellow timbre of his idol, Lester Young.[1] Coming to prominence in the late 1940s with Woody Herman's big band, Getz is described by critic Scott Yanow[2] as "one of the all-time great tenor saxophonists". Getz went on to perform in bebop, cool jazz and third stream, but is perhaps best known for popularizing bossa nova, as in the worldwide hit single "The Girl from Ipanema" (1964).

( 1957 ) - 2011 EU reissue on 180g LP= This album, Stan Getz and the Oscar Peterson Trio, recorded in 1957, showcases the very best of early Getz. He seems to have a joyful, musically sympathetic bond with the other musicians (Peterson on piano, Herb Elli

( 1957 ) 2015 EU reissue on 180g LP-Whatever Norman Granz was using as a thinking man's energy drink in 1957 when he formulated this Jazz at the Philharmonic all-star band should be bottled and sold to the world. This stroke of genius was manifested in pa