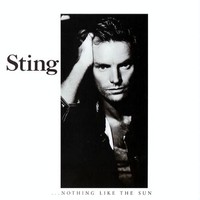 Sting is an English musician, singer-songwriter, multi-instrumentalist, activist, actor and philanthropist. He is best known as the principal songwriter, lead singer, and bassist for the new wave rock band The Police and for his subsequent solo career. He is a Commander of the Order of the British Empire; This award was granted by Queen Elizabeth II.

In 2006, Paste magazine ranked him 62nd on their list of the "100 Best Living Songwriters". He was ranked 63rd on VH1's "100 Greatest Artists of Rock",[3] and 80th on Q magazine's "100 Greatest Musical Stars of 20th Century". Sting has also collaborated with other musicians, including the duet "Rise & Fall" with Craig David and the number one hit "All for Love", with Bryan Adams and Rod Stewart.

( 1987 ) 2016 EU reissue on 180g 2xLP=including Englishman In New York, We'll Be Together plus a cover of Hendrix's Little Wing =Nothing Like The Sun followed in 1987, topping the charts in the UK and entering the Top 10 in the US. Expanding on the sound

2019 EU issue 180g vinyl 2xLP-Sting's favorite songs from both his solo period and his career with The Police re-recorded some of his old numbers on this release “My Songs”. It includes massive Police hits like ‘Every Breath You Take’, ‘Message In A Bott

2021 EU issue on 180g vinyl LP = the fifteenth studio album by British singer-songwriter StingSting is back with a great album! includes a.o. the following tracks: “Rushing Water”, “The Book Of Numbers”, “The Bells Of St. Thomas”, “The Bridge” and more.

2016 EU reissue on 180g vinyl LP = 57th & 9th is Sting's 12th solo studio album and first rock/pop project in over a decade. The 10-song collection represents a wide range of Sting's musical and songwriting styles, from the ferocious, Road W...

( 1993 ) 2016 EU reissue 180g vinyl LP =Ten Summoner's Tales is an amazing compilation of 11 songs that really push boundaries with his musicianship while staying true to his excellent songwriting. The songs included on this album are both immerse and exp