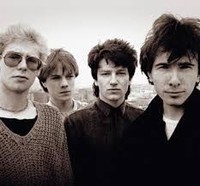 U2 are an Irish rock band from Dublin. Formed in 1976, the group consists of Bono (vocals and guitar), The Edge (guitar, keyboards, and vocals), Adam Clayton (bass guitar), and Larry Mullen, Jr. (drums and percussion). U2's early sound was rooted in post-punk but eventually grew to incorporate influences from many genres of popular music. Throughout the group's musical pursuits, they have maintained a sound built on melodic instrumentals, highlighted by The Edge's timbrally varied guitar sounds and Bono's expressive vocals. Their lyrics, often embellished with spiritual imagery, focus on personal themes and sociopolitical concerns.

2006 EU 2LP vinyl set edition, featuring 16 of their best-known songs which span their entire 26year career plus the previously unreleased tracks The Saints Are Coming with Green Day & Window In The Skies producedby Rick Rubin at Abbey Road Studios ...

( 1984 )2009 EU remastered on 180g LP -Moody gems such as "A Sort of Homecoming" and the entrancing "Bad" set the table for more explosive fare such as "Pride [In The Name Of Love]," "Wire," and the title track. The Unforgettable Fire is U2's first album

( 1991 ) - 2021 EU 30th annivesry reissue on 180g 2LP -including the classic tracks "Even Better Than The Real Thing", "One", "The Fly and Mysterious Ways". A limited-edition black vinyl release of the Grammy-award winning U2 album Achtung Baby, to celeb

(1985) 2018 EU reissue on 180g vinyl remaster = Wide Awake in America is a four-track extended play by Irish rock band U2. It combines two live performances of songs from the group's 1984 album The Unforgettable Fire with two B-sides from the era,

( 1997 ) 2018 EU reissue on 180G 2LP-with the singles "Discothèque," "MOFO" - known for its techno, dance and electronics influences. This made it accessible to a large audience and achieved the number 1 position in 32 countries. In America, the album ac

( 2004 ) 2017 EU reissue on 180g LP-2004's How To Dismantle An Atomic Bomb was an album that not only led to three more Grammy Awards for U2, but heralded their momentous arrival in the Rock and Roll Hall of Fame. From the very first sound of Larry Mullen