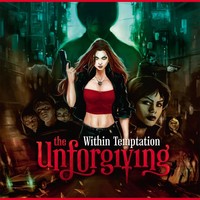 Within Temptation is a Dutch symphonic metal / rock band founded in April 1996 by vocalist Sharon den Adel and guitarist Robert Westerholt.[3] They have always been classified by critics as gothic metal and symphonic metal, although rock and industrial influences have their place on the last and 7th studio album Resist. Their most prominent and well-known sound is described as symphonic metal,[4] although their earlier material, such as debut album Enter, was mostly gothic metal,[4][5][6][7] with Enter also having a hint of doom metal. In an interview, den Adel said they fell into a symphonic rock genre with various influences.[8] In a later interview with Dutch music platform 3VOOR12, den Adel stated that "we consider ourselves more a symphonic rock band ... in my opinion, we are no gothic band".

( 1997 ) - 2018 EU reissue on coloured 180g vinyl LP =the symphonic metal band Within Temptation released their debut feat. "Restless", "Candles" and "Deep Within". rooted within the gothic and doom metal, with harsh grunts from Robert Westerholt and Shar

( 1998) - 2018 EU reissue on 180g vinyl EP -Available on vinyl for the first time
1998 EP feat. "The Dance" and "Remix Restless"- The Dance is an EP from the Dutch symphonic metal band Within Temptation. The EP consists of 5 tracks immersed in their dark

( 2000 ) 2019 EU reissue on 180g vinyl 2LP -feat. "Ice Queen" and "Mother Earth", Mother Earth is the first album by the Dutch metal band Within Temptation. Featuring Sharon den Adel as the only vocalist the direction of the band changed from their doom

WITHIN TEMPTATION - - Heart of Everything =2LP= Coloured=

(2007) - 2019 EU reissue on limited coloured vinyl 180g 2LP-The Heart Of Everything is the fourth studio album by the successful Dutch symphonic metal band Within Temptation. The album charted all over the world, including several top 10 positions, and it