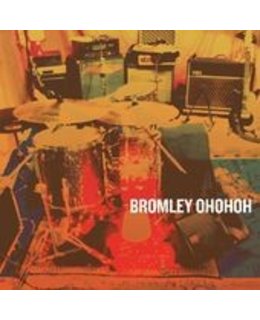 2013 Dutch issue on  vinyl LP- The Hague-based garage rock trio Bromley's debut "Oh Oh Oh" came in the winter, but in summer at least as tasty! Bromley is drums, bass, guitar and vocals. A Hague trio that makes jagged, firm but calm, catchy, melodic songs. "Indie garage-rock'n'roll", Messrs call it. The music sounds Belgian and British. Bromley was founded in early 2012. In the summer of the same year, Bromley went into the studio with Lasse Dellbrügge behind the buttons to record an EP. The release of the EP took place on October 24, 2012 and was presented in the Supermarket in The Hague. This was also the debut performance of the trio.

In April 2013 Bromley ducked back into the studio (Studio Labtones, Dordrecht). Along with Jasper producersduo Village and Wilco Minderhoud took the lords of Bromley in just one weekend a full album. The album, titled "Oh Oh Oh", is also the debut of Bromley and in December 2013 just before Christmas on vinyl. 2014 will be marked by the release of the LP and the arrival of a new record.