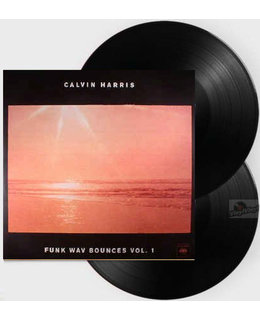 Calvin Harris managed to find a way to distill the sounds of summer into a near-perfect spirit on his fifth effort, Funk Wav Bounces, Vol. 1. Assembling an all-star roster of performers for an economic ten-track burst that doesn't overstay its welcome, the Scotsman made a surprising turn away from the EDM anthems that defined much of his output for the bulk of a decade.

Much like Daft Punk's throwback Random Access Memories, Bounces is a satisfying dose of futuristic nostalgia performed mostly on live instruments by Harris. Joining him are nearly two-dozen high-profile guests from the worlds of rap, R&B, and pop, joining forces on team efforts that sound like the soundtrack to the coolest beach party to which you weren't famous enough to be invited. ScHoolboy Q, PartyNextDoor, and the ever-endearing D.R.A.M. unite for the elastic "Cash Out," while Snoop Dogg, John Legend, and Migos' Takeoff smooth things out on the sexy "Holiday." Future and Khalid collide on the gorgeous "Rollin," and Kehlani shines with Lil Yachty on "Faking It." Ariana Grande steals the show on the effervescent "Heatstroke," despite Pharrell Williams and Young Thug's best efforts. Williams returns with Katy Perry and Big Sean for "Feels," an island getaway that transports listeners on its funky groove. Above all stands the indomitable "Slide," an instant classic featuring Frank Ocean and two-thirds of Migos, with Offset outshining Quavo by a margin. Even less immediate contributions by Travis Scott and A-Trak ("Prayers Up"), Nicki Minaj ("Skrt on Me"), and Jessie Reyez ("Hard to Love") keep the festivities afloat. Funk Wav Bounces impresses not just with the marquee names, but with how effortless, communal, and fun Harris makes it all feel.