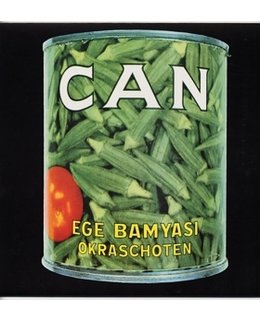 2013 EU reissue on 180g green vinyl LP -Ege Bamyasi, originally released in 1972, is the fourth album from the German rock experimentalists and follow-up to their critically acclaimed 1971 album Tago Mago. The record finds the band transitioning from the edgy excursions of their earlier albums to the more nuanced ambience of their later fare, a sound that would lend itself to many soundtrack opportunities.

ge Bamyasi features the single "Spoon," which became the theme tune for the crime thriller Das Messer and also the band's first chart success in Germany. The track, which was the first time that Can used an early version of a drum machine, led to a Goldene Europa TV award in recognition of the band's soundtrack work. The album also included the music from another TV crime series in the form of "Vitamin C."

"I didn't see anything written about Can, I didn't know anything about them except this okra can on the cover, which seemed completely bizarre. I finally picked that record up, and I completely wore it out. It was so alluring. Something about it made Can seem to be playing outside of rock 'n' roll. It was unlike anything else I was hearing at the time." - Thurston Moore

"I played Can's Ege Bamyası album every night before I went to sleep for about three years." - Stephen Malkmus

Can The Singles =3LP=