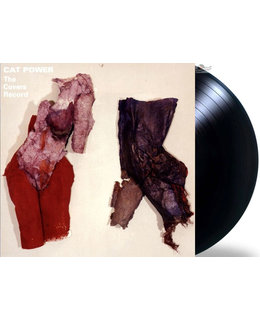 ( 2000 ) -2011 EU reissue on standard LP-This 2000 Album, One of Cat Power's most beloved records, containing her unique take on songs by The Rolling Stones, Bob Dylan, Michael Hurley, The Velvet Underground, Bill Callahan, and others. Contains "Sea Of Lo

2011 EU reissue on standard LP-One of Cat Power's most beloved records, containing her unique take on songs by The Rolling Stones, Bob Dylan, Michael Hurley, The Velvet Underground, Bill Callahan, and others. Contains "Sea Of Love" as heard in the film "Juno", and in a prominent Met Life ad, "I Found A Reason" as heard in the film "V For Vendetta," and "Satisfaction", one of her most beloved covers.

Tracks:
A1 (I Can't Get No) Satisfaction
A2 Kingsport Town
A3 Troubled Waters
A4 Naked If I Want To
A5 Sweedeedee
A6 In This Hole

Reclusive singer/songwriter's shyness is channeled through her haunting, exquisite indie pop tunes, a critical fave since the '90s.

"...Ah, rock repertory. How do you revive songs that have been branded into our heads?....Playing solo guitar, or autoharp, [Chan] Marshall paints herself by other people's numbers....The approach risks seeming hackneyed...but the surgical artistry is adroit..." --Spin

"...Wondrous and here, backed only by guitar or piano, she inhabits other singer's material...with a fierce conviction that's often startling..." --Mojo

On the The Covers Record, Chan Marshall continues her evolution into a remarkably expressive interpreter of songs; her earlier covers of Pavement's "We Dance" and Smog's "Bathysphere" are among her most distinctive performances. This collection includes songs originally by Bob Dylan, the Rolling Stones, the Velvet Underground, Moby Grape, Michael Hurley, and Anonymous. Marshall's sparest album yet, The Covers Record uses guitar and piano as the only foils for her malleable, emotional voice. These tools are more than enough to turn the Stones' anthem "(I Can't Get No) Satisfaction" into a bluesy, slinky version emphasizing the song's tension and frustration as much as its jaded sexiness, and "Kingston Town" from a reggae standard into a hymnal reflection. Marshall's gentle version of Hurley's "Sweedeedee" and plaintive reading of the Velvets' "I Found a Reason" recall the quietest, most spiritual moments from Moon Pix. This culminates on the cover of her own "In This Hole" from What Would the Community Think; one of the most drastic revisions, its soft pianos and serene vocals replace the original's turbulent anguish, reflecting her changing musical path. Marshall explores many emotional directions, from her yearning version of Moby Grape's "Naked If I Want To" to her brooding sensuality on "Wild Is the Wind," to her down-home optimism on Bob Dylan's "Paths of Victory." "Salty Dog"'s lilting melody and humorous lyrics bring out Marshall's Georgia twang, while her version of Smog's "Red Apples" shows off her voice's sensual lows and keening highs. The joyous cover of "Sea of Love" (originally by Phil Phillips) brings this accomplished, heartfelt Covers Record to a very happy end.

Cranberries Everybody Else Is Doing It, So Why Can't We? = 25th anni =

Antony and the Johnsons (ANOHNI ) I Am A Bird Now