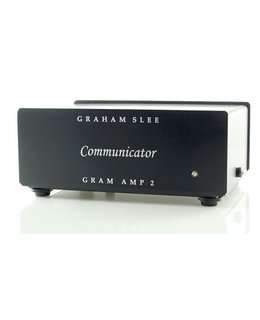 A top notch high end performance moving magnet sensitivity phono preamp stripped down to its most basic function and presented in a low cost anodized aluminium enclosure so the listener on a budget can enjoy high end sound.

The best spent money on a phono preamp! Since its introduction in 2001 the budget Gram Amp 2 continues to communicate what's in the groove - nothing can compare at the price!

A top notch high end performance moving magnet sensitivity phono preamp stripped down to its most basic function and presented in a low cost anodized aluminium enclosure so the listener on a budget can enjoy high end sound.

Supplied with an economy carbon friendly remote power supply, the Gram Amp 2 Communicator can be given a serious performance uplift by powering it from our PSU1 power supply.

The output of the Gram Amp 2 Communicator phono preamp is optimised for use with integrated amplifiers and high output magnetic cartridges.

It is an ideal phono preamp for DJ use and also for digitising records to computer. Or just use it for listening to your vinyl records and you'll be immersed in hours of glorious fatigue-free listening.

Read the user and media reviews of the Gram Amp 2 since its original plastic-cased introduction in 2001 and you'll discover why it's such a long-lived top selling budget stage.

The GramAmp 2 was something else... What I didn't expect was for it to soundstage like a four-figure pre. This is the hardest thing for a phono stage to do. For it to come off the stage it must faithfully preserve the information on the disc, including keeping a firm grip on phase. The Gram 2 was fully a match for the Audion in this respect. Swapping to the Korato pre, which I strongly suspect is even better than the Audion, the Korato held on to a small lead in width and gave a slightly deeper soundstage. But though the difference was noticeable in an A/B I'm not sure I could have identified which was playing if I just walked into the room. And the Gram 2 gave nothing away in detail. It just lacked a little of the power and glory of the 'hi-end' stages, but at a tiny fraction of the cost this was a stonking performance.

"Timing is excellent: listening to Four Tet, the rolling rhythm pulls us in to the track and the level of detail keeps us hooked, listening to various intricacies we might not have heard before. It’s fast, organised and dynamic ...