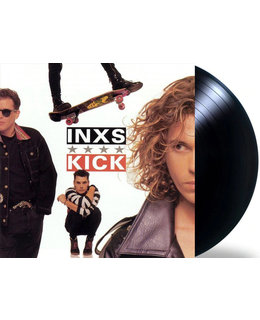 2017 EU reissue on 180g vinyl 2LP = 2011 collection from the Australian rock icons. The Very Best will transport listeners through the band's worldwide hits of the past and present. a.o "Need You Tonight," "Original Sin,"  "Suicide Blonde" and "Devil Inside".

Tracks:
LP1:
A1 Need You Tonight
A2 Mystify
A3 Suicide Blonde
A4 Taste It
A5 Original Sin

With a career spanning over 30 years, INXS is one of the biggest rock groups in the world today, The Sydney band who released their first single 'Simple Simon' in 1980 exploded onto Australian and global stages with the release of their 1982 album Shabooh Shoobah, The band's impact was felt when the single 'Need You Tonight' from the album Kick was released in 1987 catapulting lead singer Michael Hutchence into the global spotlight, One in a rare line of frontmen to have become such a musical icon, Hutchence's life has been well documented in the media, His career and personal life has been reported to be packed full with the stuff that true rock n roll legends are made of - wild times, beautiful women, countless awards and beautiful iconic look made him the ultimate 80s and 90s sex symbol around the world, Michael Hutchence lived the rock and roll lifestyle to the extreme as INXS continued their success in the Australian and indeed international charts, until November 1997 when Hutchence was found dead in his hotel room in Sydney.