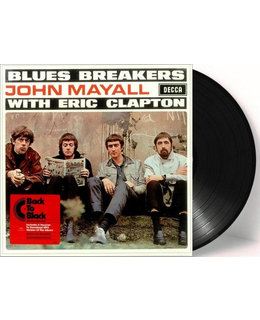 ( 1966 ) - 2008 EU reissue on 180g LP+download-1966’s seminal Blues Breakers with Eric Clapton marked John Mayall’s emergence as a major recording artist, as well as his commercial breakthrough. The 12-song LP, considered by many to be the most influenti

2008 EU reissue on 33RPM 180g vinyl LP+download-1966’s seminal Blues Breakers with Eric Clapton marked John Mayall’s emergence as a major recording artist, as well as his commercial breakthrough. The 12-song LP, considered by many to be the most influential British blues album of all time, marked the official introduction of Mayall’s long-running, ever-evolving combo the Bluesbreakers. Mayall shares the spotlight here with soon-to-be-superstar guitarist Eric Clapton (who quit the Yardbirds in order to pursue his blues muse with Mayall), along with future Fleetwood Mac co-founder John McVie on bass and Hughie Flint on drums.

Tracks:
A1 All Your Love
A2 Hideaway
A3 Little Girl
A4 Another Man
A5 Double Crossing Time
A6 What'd I Say

Blues Breakers with Eric Clapton is generally acknowledged as a musical milestone for Clapton; his scorching playing and over-the-top tone dominates the entire album. With the group’s punchy performances captured in straightforward style by noted producer Mike Vernon, the album offers a potent combination of Mayall originals and distinctive interpretations of songs by Ray Charles, Freddie King, Little Walter and Otis Rush. From the pristine U.K. mono masters, with complete original artwork and photos.

Tired of a creeping tendency towards pop territory that was happening in his old band, the Yardbirds, Eric Clapton was after one thing alone: the blues. With John Mayall and his pool of fledgling giants he got it in spades.

While Clapton’s roots lay in the sweaty R’n’ B of west London’s hip clubs he’d grown sick of what he saw as wrong-headed chasing after fame and fortune (and an unhealthy adherence to Chuck Berry’s template). As only a young man can do, he became a purist of the sternest kind, and in Mayall he found a man who felt the same. With less of a jazz background than the other father-figure to the British blues boom, Alexis Korner, Mayall was an alchemist of the highest order.

These men didn’t just distil the blues. They turned it into something new. Blues rock was to rule the ‘underground’ for years following this single blast of truly electric 12 bar music. One element was to be the most important: Clapton’s pairing of a vintage Gibson Les Paul with an overdriven Marshall amplifier. Within literally weeks guitarists all over the country were doing the same. It was that revolutionary.

The album really pays tribute to Buddy Guy and Freddie King, Clapton’s heroes to this day. It’s the edgier end of Chicago that drives each riff with the rhythm section of John McVie and Hughie Flint locked in tight. Eric’s pyrotechnics on “Steppin’ Out” still dazzle. While Mayall’s vocals are drenched in reverence for the material his essentially thin voice hasn’t worn quite so well. However on “Parchman Farm” his rasp is gutsy as hell.

It was a brief tenure for EC. Just as soon as he’d upset the apple cart, he was off to add a dash of jazz and psychedelia to his palette with the mighty Cream. Mayall continued for years to give a home to future stars (bassist, John McVie of course was to find fame with Clapton’s successor – Peter Green). But to this day, from the first rip into to the final chord of the ‘Beano Album’, as it came to be known, remains just about the defining argument as to why Clapton really was once, God