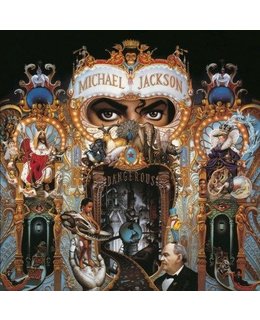 2018 EU remastered on 180g 2xLP -Incl. the hits :"Remember The Time", "Black Or White" a.o.- With Dangerous released in November 1991, Michael Jackson's career really sustained its high. The album entered the Billboard 200 album chart at number 1 and sold over 32 million copies worldwide in the space of 17 years. The RIAA certified Dangerous 7x platinum for shipping 7 million copies in the United States.

With hit singles such as "Black Or White", "In The Closet", "Remember The Time", "Jam", and "Who Is It", "Dangerous"and the unforgettable music videos that supported the tracks, Michael Jackson showed his true strength by delivering yet another classic album, despite the fact that it was not produced by Quincy Jones (Off The Wall , Thriller and Bad ).

Although Dangerous is definitely part of Jackson's quartet of aforementioned classic albums and shows off a diverse range of styles, the multi-platinum, number one album is sometimes overlooked. However, we present the album on 180 gram audiophile vinyl (2LP) and with remastered sound, to maximize your listening pleasure!

B1. She Drives Me Wild
B2. Remember The Time
B3. Can't Let Her Get Away
B4. Heal The World