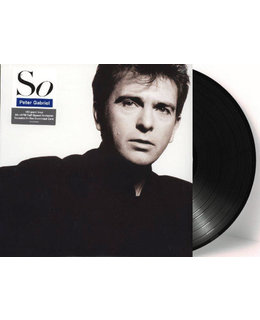 2016 EU reissue on 180g LP+Hi-res download=Peter Gabriel's iconic So (1986)-The first of Gabriel's studio albums to have a proper title, So was a watershed release with its perfect marriage of the artistic and the commercial. The album, produced by Daniel Lanois and nominated for the Grammy Award for Album of the Year, features intriguing collaborations with the likes of Laurie Anderson, Kate Bush and Youssou N'Dour and contains some of Peter's most recognizable and popular songs ("In Your Eyes," "Red Rain," "Sledgehammer," "Big Time").

“It has been heart warming to see the return of vinyl. Even though I loved being free of its limitations in the digital world, there is still a warmth and presence to vinyl that somehow makes it a more natural human companion. It is great to see a new generation learning the secrets of the grooves.” – Peter Gabriel

Tracks:
A1 Red Rain
A2 Sledgehammer
A3 Don't Give Up
A4 That Voice Again

Peter Gabriel Scratch My Back And I ll Scratch Yours =2LP=

Daniel Lanois For The Beauty Of Wynona