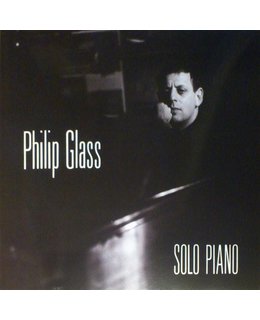 2014 reissue on 180g LP=With Solo Piano, Glass presents himself "unplugged" - no electronic keyboards or synthesizers, and no overdubs, either - just solo piano.

With Solo Piano, Glass presents himself "unplugged" - no electronic keyboards or synthesizers, and no overdubs, either - just solo piano. "Metamorphosis" was written in 1988 and takes its name from a play based on Kafka's short story. Its second track, "Metamorphosis Two", formed the basis of one of the main musical themes in the film "The Hours". It is also the song that the American rock band Pearl Jam uses as their introduction music to concerts.

"Mad Rush" was written for the occasion of the Dalai Lama's first visit in New York City. "Wichita Vortex Sutra" is the result of a chance meeting between two long-time friends, Glass and poet Allen Ginsberg, in a bookstore in the East Village. 'We decided on the spot to do something together, reached for one of Allen's books, and chose the poem "Wichita Vortex Sutra"'.