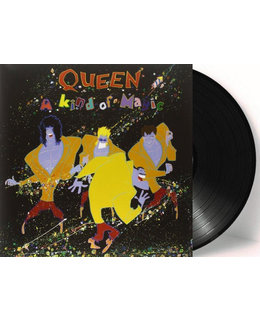 ( 1978 )-2015 EU halfspeed remastered on 180g Vinyl =Queen’s twelfth studio album began life as the soundtrack to the motion picture Highlander. the much loved "One Vision" was the first single issued from the Magic album while the title cut served as the

2015 EU reissue pressed on 180g Vinyl halfspeed remastered=Queen’s twelfth studio album began life as the soundtrack to the motion picture Highlander, after director Russell Mulcahy had commissioned a handful of tracks from the band. He regarded Queen as the ideal band for the task and would later comment that it was always Queen he had in mind because of their strong, anthemic songs. “The film needed their energy,” Mulcahy has said. The band were so impressed with the first 20 minutes pf rough footage they were shown to get a flavor of the production that further tracks soon followed and the A Kind of Magic album was born.

Tracks:
A1 One Vision
A2 A Kind Of Magic
A3 One Year Of Love
A4 Pain Is So Close To Pleasure
A5 Friends Will Be Friends

Each Queen band member was inspired by different parts of the story and in evidence the album covers a wide spectrum of emotions. The songs are full of references to the film and dialogue and its main characters and events. May, was greatly moved by the death of Heather in the film. "Who Wants To Live Forever" is the song that emerged from this poignant moment of the movie. Taylor, meanwhile, was taken by the lines “There can be only one” and “It’s a kind of magic” and this gave rise to his song of similar name. Freddie’s anthemic "Princes Of The Universe" is a typical no-nonsense, uncompromising piece.

A Kind Of Magic was released in June 1986 and entered the UK charts at No 1. It achieved double platinum status at home and abroad and it topped the charts in many other countries. Even though it appeared six months ahead of the LP, in November 1985, the much loved "One Vision" was the first single issued from the Magic album while the title cut served as the follow-up. "Princes Of The Universe," "Friends Will Be Friends," "Who Wants To Live Forever" and "One Year Of Love" were also released in various territories.