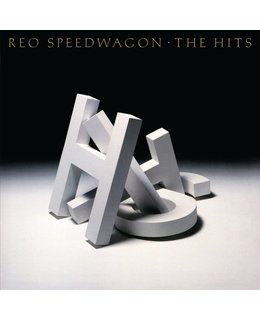 2020 EU reissue standard vinyl LP - Jam packed with smash hit singles and unforgettable album tracks, Comilation including "Don't Let Him Go,"" Time For Me To Fly " and "Keep Pushin'," plus the solid power ballads like "Take It On The Run", and of course the super sounds of "Keep On Loving You" and "Can't Fight This Feeling".

Though there is a rather large quantity of REO compilations, Hits remains the wisest investment for most listeners.-AllMusic

Tracks:
A1 I Don't Want To Lose You
A2 Here With Me
A3 Roll With The Changes
A4 Keep On Loving You
A5 That Ain't Love

REO Speedwagon have been a favorite rock band of choice in the hearts and minds of classic rock music lovers for many years now. Led by the dynamic vocalist and front man Kevin Cronin, this powerful quintet hit the top of the charts many times with their mega-times platinum albums and hit singles that Epic Records awarded them with their first Greatest Hits collection simply titled THE HITS!

As time has been good to them, the album firmly places them as one of the industry's most popular acts of all time. Jam packed with smash hit singles and unforgettable album tracks, THE HITS kept REO Speedwagon all over the radio dial and packing in concert arenas ever since.