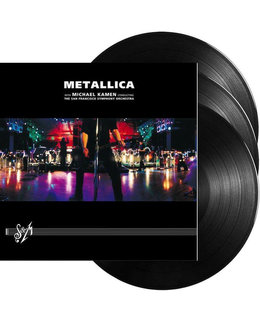 1999 - 2015 EUreissue on 180g vinyl 3LP - pairing with the San Francisco Symphony. Featuring a multitude of classic reworked highlights from the back catalogue including "One, Battery," "Enter Sandman," "Master Of Puppets" & "Nothing Else Matters".

2015 EU issue on 180g vinyl 3LP set- Featuring a multitude of classic reworked highlights from the back catalogue including "One, Battery," "Enter Sandman," "Master Of Puppets" & "Nothing Else Matters".

Upping the ante on everything they had done previously, Metallica engages in a once-in-a-lifetime pairing with the San Francisco Symphony under the direction of Michael Kamen on a live set that's positively thunderous. With the orchestral backing of strings, tympani, horns, and more, Metallica has never sounded as powerful or dramatic.

Grammy and Oscar-nominated composer/conductor/arranger Michael Kamen scored the symphony and conducted the performances, while Bob Rock, the iconic engineer that captured the band on Load, Re-Load and the diamond-platinum certified Metallica, served as producer. The results are amazing. Several of Metallica's most beloved songs are slightly transformed, while others simply gain in strength and momentum. The group's signature onstage introduction theme, "The Ecstasy of Gold," overwhelms with dramatic sway.

In addition, the quartet debuts two new compositions here: the complex, celebrated "No Leaf Clover" and never-again-performed "Human," each sent up with equal parts magnificent eloquence and raw edginess. This is a performance for the ages!

Tracks:
A1 The Ecstasy Of Gold (Composed By – Ennio Morricone)
A2 The Call Of Ktulu
A3 Master Of Puppets

After 1988's ...And Justice for All, Metallica pared down its progressive, heavy metal sound. During the '90s, the band's studio releases grew slicker and more produced, resulting in mostly radio-friendly, good ol' boy metal. By the end of the decade, Metallica was established as the pioneer of modern metal, but the band hadn't done anything innovative, arguably, in ten years. In April 1999, the group performed two concerts with the San Francisco Symphony, and the result was S&M, a two-disc collection of the concerts. Overall, the album successfully pairs violin strings with guitar strings, but it's no surprise that the best tracks here are the older songs; their multi-layered, compositional style works well with symphonic arrangements. "Master of Puppets," "Call of the Ktulu," "One," and "For Whom the Bell Tolls" sound richer and fuller with violin, trumpet, clarinet, harp, trombone, and flute accompaniments, but "Sad but True," "Devil's Dance," and especially "Of Wolf and Man" range from haphazard and melodramatic to uninspired. S&M definitely has its moments, and not just with the pre-Black Album material: "Fuel" surpasses the furious pumping energy of the studio version, "Hero of the Day" stays poignant throughout, and "Until It Sleeps" has a wonderfully sinister feel. James Hetfield maintains his madman persona from beginning to end, laughing maniacally and grunting and growling at all the right moments. Overall, the symphony adds a macabre, ghoulish atmosphere -- it all sounds like a Broadway freak show or a revved-up Danny Elfman nightmare. Which is exactly what a Metallica album should sound like, even if every song isn't the best (or most appropriate) in the band's catalog.