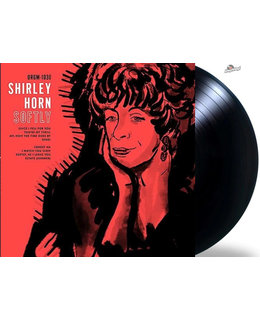 2018 US reissue on 180 gram HQ vinyl LP - Never before been pressed to vinyl, Shirley Horn’s Softly is reflective of the album’s late night recording sessions at Peirre Sprey’s home recording studio in rural Maryland, aptly named Mapleshade Studio. The 1988 release is commonly referred to as one of Horn’s most introspective and emotionally intensive records to date.
With her sidemen Charles Ables (bass) and Steve Williams (percussion) gathered into a quaint, pastoral living room full of recording equipment, the trio plowed through the tunes, tracking almost until dawn. The album was remastered for vinyl at Infrasonic Mastering and pressed on audiophile-grade vinyl at Pallas Group in Germany.

Tracks:
A1 Since I Fell For You
A2 You're My Thrill
A3 My, How The Time Goes By
A4 Dindi
B1 Forget Me
B2 I Watch You Sleep
B3 Softly, As I Leave You
B4 Estate (Summer)

Features:
• Remastered For Vinyl At Infrasonic Mastering
• Pressed at Pallas in Germany
• First ever vinyl pressing