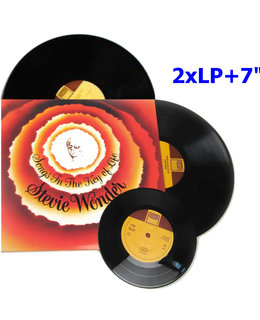 2015 EU REissue on 180g 2LP-Expanded and remastered reissue of the 1962 classic album and its successful follow-up. For Ray Charles, this music represented the culmination of a lifelong love affair he shared for Country & Western music. It vastly expanded his pop demographic and made countless new country converts by giving these 24 songs a soul-steeped urban dimension. Country soul & jazz collide! w/ "I Can't Stop Loving You" & ", "You Don't Know Me"

Tracks:
Volume One
A1 Bye Bye Love
A2 You Don't Know Me
A3 Half As Much
A4 I Love You So Much It Hurts
A5 Just A Little Lovin'
A6 Born To Lose

B1 Worried Mind
B2 It Makes No Difference Now
B3 You Win Again
B4 Careless Love
B5 I Can't Stop Loving You
B6 Hey, Good Lookin'
Bonus Tracks
B7 I'm Moving On
B8 At The Club

Volume Two
C1 You Are My Sunshine
C2 No Letter Today
C3 Someday (You'll Want Me To Want You)
C4 Don't Tell Me Your Troubles
C5 Midnight
C6 Oh, Lonesome Me
C7 Take These Chains From My Heart

Less modern for its country-R&B blend (Elvis Presley and company did it in 1955) and lushly produced C&W tone (the Nashville sound cropped up in the late '50s) than for its place as a high-profile crossover hit, Modern Sounds in Country and Western fit right in with Ray Charles' expansive musical ways while on the Atlantic label in the '50s. In need of even more room to explore, Charles signed with ABC Paramount and eventually took full advantage of his contract's "full artistic freedom clause" with this collection of revamped country classics. Covering a period from 1939 to the early '60s, the 12 tracks here touch on old-timey fare (Floyd Tillman's "It Makes No Difference to Me Now"), honky tonk (three Hank Williams songs), and early countrypolitan (Don Gibson's "I Can't Stop Loving You"). Along with a Top Ten go at Eddy Arnold's "You Don't Know Me," the Gibson cover helped the album remain at the top of the pop charts for nearly three months and brought Charles international fame. Above a mix of swinging big band charts by Gerald Wilson and strings and choir backdrops from Marty Paich, Charles' intones the sleepy-blue nuances of country crooners while still giving the songs a needed kick with his gospel outbursts. No pedal steel or fiddles here, just a fine store of inimitable interpretations.