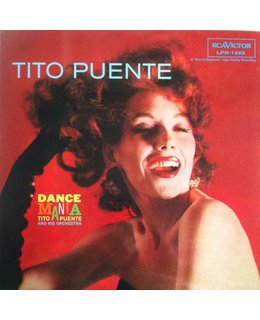 2013 EU reissue on 180g audiophile vinyl  LP-Dance Mania is Tito Puente's all-time favorite and bestselling album from 1958. Featuring the inimitable Ray Baretto on percussion, Dance Mania does exactly what the title says: shake your derriere like you just don't care! This record should belong in everyone's Jazz, Soul, Latin Music Collectors "Must Have."

Dance Mania, Tito Puente's best-known and best-selling album, came ten years into his career, but at a time (1957) when the craze for mambo and Latin music was beginning to crest. (Another landmark LP, Pérez Prado's Havana 3 A.M., had been released the previous year, and Prado's "Cherry Pink and Apple Blossom White" had hit number one in 1955.) Recorded as part of a just-signed exclusive contract with RCA and appearing in vibrant sound as part of the label's Living Stereo series, Dance Mania exploded with a series of tight arrangements, propulsive playing, and the features of new additions in vocalist Santos Colón and conguero Ray Barretto (who helped, in part, make up for the recent loss of Willie Bobo and Mongo Santamaria to Cal Tjader's group). Puente didn't dilute his sound for Dance Mania -- unlike the many commercial crossover LPs that were released by both established groups and ad hoc studio collectives -- but his hard mambos here were performed at tempos that encouraged dancing by more staid LP-buyers, slightly slower than the high paces of his Tico sides or Palladium shows. Brassy and swinging, yes, and certainly as precise as a great Latin band could get, but not as torrid as Spanish Harlem dancers would be accustomed to. Most were Puente originals, spanning mambo and cha-cha and guaguanco, and Dance Mania built the foundation for great Latin LPs to come.