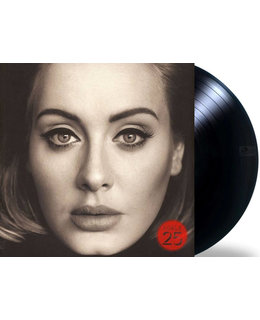 The agonizing wait is over. 25, Adele’s third album is finally here, and it’s a knockout. Conveying the same transfixing blend of soulfulness, stylishness, independence, and emotion she displayed on her earlier record-breaking efforts but showing increased senses of maturity, poise, and agility, the British singer turns 25 into a statement-making musical showcase you’ll be hearing for years to come. Hers is a vocal performance you need to experience in analog. Get the must-own record of 2015 today!

B1. Water Under The Bridge
B2. River Lea
B3. Love In The Dark
B4. Million Years Ago
B5. All I Ask
B6A. Sweetest Devotion

"My last record was a break-up record and if I had to label this one I would call it a make-up record. I'm making up with myself. Making up for lost time. Making up for everything I ever did and never did. But I haven't got time to hold on to the crumbs of my past like I used to. What's done is done. Turning 25 was a turning point for me, slap bang in the middle of my twenties. Teetering on the edge of being an old adolescent and a fully-fledged adult, I made the decision to go into becoming who I'm going to be forever without a removal van full of my old junk.

"I miss everything about my past, the good and the bad, but only because it won't come back. When I was in it I wanted out! So typical. I'm on about being a teenager: sitting around and chatting shit, not caring about the future because it didn't matter then like it does now. The ability to be flippant about everything and there be no consequences. Even following and breaking rules...is better than making the rules. 25 is about getting to know who I've become without realising. And I'm sorry it took so long, but you know, life happened." - Adele