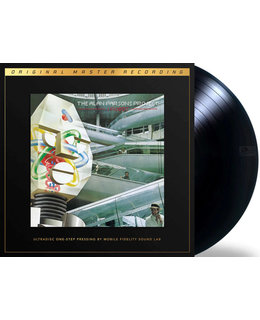 Audiophiles don't need any introduction to the Alan Parsons Project's I Robot. Engineered by Parsons after he performed the same duties on Pink Floyd's Dark Side of the Moon, the 1977 record reigns as a disc whose taut bass, crisp highs, clean production, and seemingly limitless dynamic range are matched only by the sensational prog-rock fare helmed by the keyboardist. Not surprisingly, it's been issued myriad times. Can it be improved? Relish Mobile Fidelity's stupendous UltraDisc One-Step 180g 45RPM 2LP box set and the question becomes irrelevant.