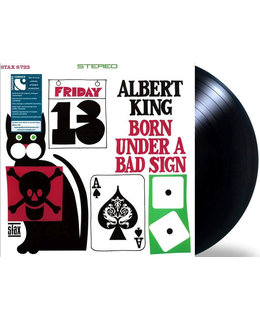 2018 German Speakers Corner reissue on HQ 180g vinyl LP =Upon release in 1967, Born Under a Bad Sign was hailed as an instant classic. It has since been recognized as one of the all-time great blues albums, with a Grammy Hall of Fame Award, placement in Rolling Stone’s “500 Greatest Albums of All Time” and induction into the Blues Foundation Hall of Fame’s “Classics of Blues Recordings” among its many accolades.

No thorough blues or rock collection is complete without it. Sundazed has sourced this edition directly from the original Stax analog masters to ensure that every lick, every line, every shout is captured. In addition to the album’s eleven original tracks, this Sundazed release adds two King rare mono single sides, “Funk-Shun” and “Overall Junction.” This “bad sign” ain’t nothin’ but good!