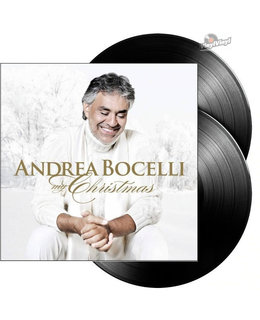 2015 EU reissue on 180g 2LP- the first Christmas album from the superstar vocalist. Includes duets with Reba McEntire, Natalie Cole, Mary J Blige and The Muppets. The album is a heart-warming collection of songs destined to become a holiday classic f...

2015 EU reissue on 180g 2LP- the first Christmas album from the superstar vocalist. Includes duets with Reba McEntire, Natalie Cole, Mary J Blige and The Muppets. The album is a heart-warming collection of songs destined to become a holiday classic for years to come. Produced by the legendary Grammy-Award winner David Foster, the album features the singer's unmistakable soaring vocals alongside duets with his special guests.

Renowned Italian tenor Andrea Bocelli - synonymous with love and romance - is the most successful classical solo artist ever and one of the best-selling performers in any genre, having sold more than 80 million albums worldwide of both his classical and pop albums. The 7 titles that form his incredible "pop" catalog - Romanza (1997), Sogno (1999), Cieli Di Toscana (2001), Andrea (2004), Amore (2006), My Christmas (2009) and Passione (2013) - were recently remastered with attention to every detail to ensure the highest sonic quality and will be released in a 180g 14LP box set with faithfully replicated gatefold packaging and printed inner sleeves.

In correlation with the box set all 7 titles will also be offered individually as 180g 2LP-sets including Bocelli's first Christmas album, My Christmas. Bocelli exclaimed, "I have long dreamed of recording a holiday album that captures the beautiful traditions of the holiday season. Every year these songs have brought incredible joy to my family and I, and it is my hope to give back that same joy by making this album. The time comes for every singer to record a Christmas album. That's probably because Christmas is the most beautiful holiday of the year. Recording a Christmas album means recording good music; music that gives joy, and instills a sense of peace."

From "I Believe," which the tenor performed before the visibly moved Pope John Paul II, to "Adeste Fideles," the album is an unmissable collection of songs each of us have sung at least once, carefully selected by Bocelli. David Foster has arranged a number of traditional carols, such as "Angels We Have Heard on High" and "What Child Is This," with unique ability and a remarkable lightness of touch, adapting each track so as to render them almost a first edition. But above all, it is the voice of Bocelli that stands out, once again engaged in a new feat.

In "White Christmas," Bocelli's voice is graceful, and tenderly soft. In "Santa Claus is Coming to Town," it becomes irresistibly playful, making it almost impossible not to sing along. In "God Bless Us Everyone," we discover Bocelli the performer. But it is in "The Lord's Prayer," performed with The Mormon Tabernacle Choir, that Bocelli really outdoes himself, in an imposing, moving performance of unique intensity. Like all great gifts, My Christmas too has surprising and unexpected elements: its duets. Bocelli called on a number of friends to create several miniature masterpieces including Katherine Jenkins ("I Believe"), Reba McEntire ("Blue Christmas"), Mary J. Blige ("What Child Is This"), Natalie Cole ("The Christmas Song") and even The Muppets ("Jingle Bells").

In a word, My Christmas is a winning album, expertly arranged, played and sung, becoming a point of reference for the entire genre. And from now on, no one, listeners and performers alike, will be able to forget this Christmas, as sung by Andrea Bocelli!

Dolly Parton Once Upon A Christmas ( w. Kenny Rogers )