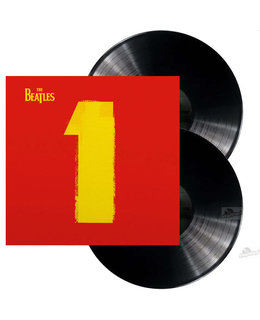 2000-2015 EU reissue on 180g vinyl 2LP-featuring new stereo mixes by Giles Martin & Sam Okell of every #1 achieved by the band in the UK & US charts, including Love Me Do, I Want To Hold Your Hand, Yesterday, Eleanor Rigby, Penny Lane, Hey Jude, Let It Be

2015 EU reissue 180g vinyl 2LP-featuring new stereo mixes by Giles Martin & Sam Okell of every #1 achieved by the band in the UK & US charts, including Love Me Do, I Want To Hold Your Hand, Yesterday, Eleanor Rigby, Penny Lane, Hey Jude, Let It Be and many more.

One-Stop Shopping for All the Beatles' #1 Hits: Among the Most Seminal and Influential Songs Ever Recorded

Reissued in Correlation with the All-New Editions of The Beatles 1!

Between 1962 and 1970, The Beatles released 27 No. 1 hit singles in the U.S. and the U.K. In 2000, these timeless songs were collected for The Beatles 1, which topped the charts in 35 countries and became that decade’s bestselling album worldwide, shipping over 31 million copies. It was and remains to this day a most emphatic introduction to and collection of The Beatles' career-spanning dominance of pop music through the 1960's.

"The Beatles work was always impeccable. Those four young men, John, Paul, George and Ringo, broke so many records and so many barriers and they will be remembered for being the most significant music creators of the twentieth century. This collection of number ones is taken from the most widely circulated charts in the UK (Record Retailer) and the USA (Billboard).

"Looking through the list of songs brings back so many memories for me. My first thought was about 'Love Me Do' - our first single. To begin with nobody wanted to know, even in our own record company. But after a lot of hard work it entered the Top 20 in the UK, and in the States it later reached number one. From then on John and Paul seemed to burst with inspiration. Those early songs were so fresh and sparkling, always surprising and delighting me with each new offering.

"Never did they fall back on cliche or a rehash of an earlier success. Each one was a gem. Before long their worked spurred George into writing great material too, like the classic ballad 'Something'. It barely took eight years to cover this collection - 'Love Me Do' to 'The Long and Winding Road' - but it was a lifetime in the world of rock and roll. A wonderful collection, and wonderful for me to have been there." - George Martin

Features:
New 2015 stereo mixes.
Comes with 5 posters and the singles pictured inner sleeves.
Made in Germany.

B1 Ticket To Ride
B2 Help!
B3 Yesterday
B4 Day Tripper
B5 We Can Work It Out
B6 Paperback Writer
B7 Yellow Submarine
B8 Eleanor Rigby