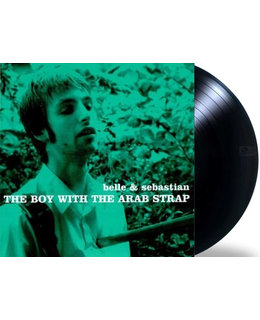 1998 EU issue vinyl LP= This 1998 album (their third) from these Glaswegian tunesmiths is another invigorating slice of poetic pop, containing a collection of songs once again peppered with witty and idiosyncratic lyrics and infectious melodies. inclu..

1998  EU standard LP= This 1998 album (their third) from these Glaswegian tunesmiths is another invigorating slice of poetic pop, containing a collection of songs once again peppered with witty and idiosyncratic lyrics and infectious melodies.  includes "Seymour Stein" and "A Space Boy Dream"

ALLMUSIC:
Belle & Sebastian quietly built a dedicated following after the release of their second album, If You're Feeling Sinister, as word of mouth spread from indie kids to record collectors to store clerks to critics. By the end of 1997, the Scottish septet had developed a following every bit as passionate as the Smiths did at their peak, which is only appropriate since leader Stuart Murdoch is as wittily literate as Morrissey. If You're Feeling Sinister proved this as did the three excellent EPs that followed, increasing expectations for The Boy With the Arab Strap. Even if the album doesn't match the peerless If You're Feeling Sinister or break new ground for Belle & Sebastian, it's not a sophomore slump. From the Motown stomp of "Dirty Dream Number Two" to the Paul Simon shuffle of the title track, there is more musical texture on Boy than Sinister, but much of this was already explored on the EPs, which means Arab Strap essentially consolidates the group's talents. Murdoch recedes from the spotlight on occasion, letting Steve Jackson deliver two music-biz spiels and giving Isobel Campbell space to shine with the lilting "Is It Wicked Not to Care?" All three songs are highlights, but Murdoch's songs still attract the most attention. His vicious wit, often overlooked in favor of his poetic narratives, surfaces on the title track, while "It Could Have Been a Brilliant Career" summarizes his effortless gift for elegant melancholia. Such small, precious gems are what Belle & Sebastian are all about, and The Boy With the Arab Strap offers another round of timeless, endlessly fascinating folk-pop treasures.

Kooks, the Inside In / Inside Out =vinyl 2LP=