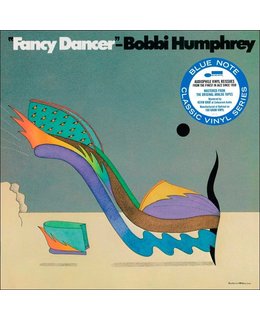 ( 1975 ) 2021 EU reissue 180g vinyl LP - Blue Note's Classic vinyl Series - proved to be a winning combination once again with Humphrey’s alluring flute dancing through a set that featured standout Mizell compositions like “Uno Esta,” “You Make Me Feel So

Bobbi Humphrey was one of the most prominent stars on the Blue Note roster of the 1970s. The flutist debuted on the label in 1971 with Flute In¸ the first in a run of six creative and highly enjoyable albums.

On her breakout 1973 album Blacks and Blues, Humphrey hooked up with the forward-thinking producer Larry Mizell to create a jazz-funk classic that expanded her audience. It proved to be a winning combination, and the two joined forces again on Satin Doll the following year.

Their third and final collaboration would be on the great 1975 album Fancy Dancer. Humphrey’s alluring flute dances through vibrant and ingenious arrangements by Larry and Fonce Mizell that skillfully wove together a broad range of influences from across the spectrum of black music.

The set featured standout tracks like the Latin grooves of “Uno Esta,” the laid-back jam “You Make Me Feel So Good,” and the album’s expansive closer “Please Set Me At Ease,” which the innovative Hip Hop beatmaker Madlib memorably remade on his 2003 Blue Note remix album Shades Of Blue.