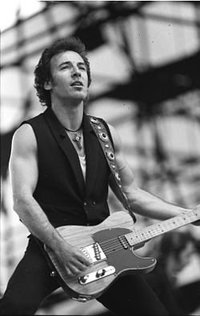 Bruce Springsteen (1949 - ) is an American musician and singer-songwriter. He is best known for his work with the E Street Band. Nicknamed "The Boss", Springsteen is widely known for his brand of poetic lyrics, Americana working class, sometimes political sentiments centered on his native New Jersey and his lengthy and energetic stage performances, with concerts from the 1970s to the present decade running over three hours in length.

Springsteen's recordings have included both commercially accessible rock albums and more somber folk-oriented works. His most successful studio albums, Born in the U.S.A. and Born to Run, showcase a talent for finding grandeur in the struggles of daily American life; he has sold more than 64 million albums in the United States (making him the fifteenth highest selling artist of all-time) and more than 120 million records worldwide, making him one of the world's best-selling artists of all time. Springsteen has earned numerous awards for his work, including 20 Grammy Awards, two Golden Globes and an Academy Award as well as being inducted into the Rock and Roll Hall of Fame and the Songwriters Hall of Fame in 1999.

( 1980 ) - 2015 EU reissue on 180g 2LP -Springsteen’s fifth albumwas an ambitious summary of his greatest musical strengths to that point, with the Top 5 single “Hungry Heart” and the party-ready tracks “Ramrod” and “Cadillac Ranch-Stickered & sealed ga

2019 EU issue on vinyl 2LP +digital-The newest studio album = nothing like his older material-- this has a deliberate pop vibe with a full string section and big wide open arrangements. Artists need to try new things and IMO this experiment was a success.

( 1993 ) 2018 EU reissue on 2LP = This concert features sixteen performances, plus 2 bonus tracks: 'Living Proof', 'If I Should Fall Behind' . It contains the first appearance in any format of 'Red Headed Woman' and Springsteen's first recorded performan

BRUCE SPRINGSTEEN - Live In Dublin ( with The Sessions Band )=3LP=

( 2007 ) 2020 EU reissue on 3LP =Bruce Springsteen With The Sessions Band Live in Dublin includes fan favorites from We Shall Overcome: The Seeger Sessions, including "Jacob's Ladder," "Pay Me My Money Down," and "Jesse James" as well as never-before-rel

( 2002 ) 2020 reissue on 180g vinyl 2LP = His Twelfth studio album includes the singles 'The Rising', 'Lonesome Day' and 'Waitin' On a Sunny Day'. . In addition to being Springsteen's first studio album in seven years, it was also his first to feature the

2020 EU issue on coloured vinyl 2xLP (side D is etched) -The Boss' First New Studio Album with the E Street Band Since 2012's High Hopes Recorded Live in the Studio with No Overdubs; Throwback Rock Album includes 9 New Springsteen Compositions Plus New Re

( 2001 ) 2020 EU reissue on 3LP = live release from the Rock icon. This set documents Springsteen and the E Street Band's highly successful 1999-2000 Reunion Tour, their first concert tour together in 11 years.

BRUCE SPRINGSTEEN - Darkness On The Edge Of Town

1999-2020 EU reissue on standard 2LP- Coming to viny This 2LP set featured highlights from the ‘Tracks’ box set, including “Pink Cadillac,” “Brothers Under The Bridge” and the original “Born In The U.S.A.” demo. It also contains three exclusive tracks: a