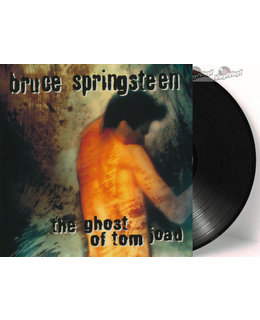 "Bruce Springsteen followed his muse on this haunting 1995 release. Perhaps that's why it barely made a dent in the marketplace, even while it thrilled the faithful who were willing to take another dark, Nebraska-like journey with him. It's abundantly clear that Springsteen had been soaking himself in the work of John Steinbeck and Woody Guthrie during the writing of The Ghost of Tom Joad, but their combined influence is found on more than just the title track. It's all over these windblown songs (including the haunting "Dry Lightning" and "the seminal "Youngstown") and their hard-scrabble protagonists. Not the Boss's biggest record, but certainly one of his best. --Michael Ruby

While 1982's Nebraska was Springsteen's first acoustic work, it was a happy accident, drawing from a series of spare four-track demos recorded in his bedroom. The Ghost Of Tom Joad, meanwhile, was an intentionally stark album, primarily consisting of solo acoustic numbers like the aching title track (famously re-interpreted by Rage Against The Machine). It also featured several full band tracks, including appearances by E Street Band keyboardist Danny Federici and bassist Garry Tallent after a full band reunion in the studio the previous year. The Ghost Of Tom Joad was also Springsteen's first full album to win a Grammy Award, in the category of Best Contemporary Folk Album.