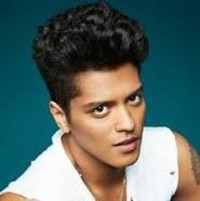 Bruno Mars(1985- ) is a singer -songwriter and producer of American music. He grew up in a musical family and started his career in music by producing other artists through the production team The Smeezingtons with Philip Lawrence and Ari Levine.

He became known with the title Nothin 'on You by BoB, and Billionaire by Travie McCoy, before the worldwide release of his debut album Doo- Wops & Hooligans in 2010. It also co-wrote the hits Right Round by Flo Rida , Wavin 'Flag K'naan and Fuck You! Cee Lo Green.

Music Bruno Mars is a mixture of different musical styles. He works with artists in various genres ; these collaborations are reflected in his own music. Child, it is highly influenced by artists such as Elvis Presley and Michael Jackson. March also draws inspiration from reggae and Motown sounds .