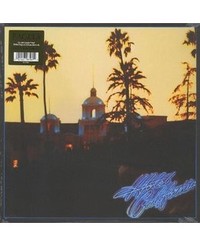 Eagles is American rock band, one of the most successful bands of all time. The band was founded in 1971 and is still active in the year 2014, although a few years break. The name refers to the American eagle, also the logo of the United States. The album Eagles - Their Greatest Hits 1971-1975 is the best-selling album of all time in the United States.

( 1976 ) - 2011 EU reissue on 180g LP =This compilation album including "Take It Easy" "Witchy Woman" "Desperado" & "Tequila Sunrise" and more. without a doubt one of the most influential American bands of all time who brought together various influences

( 1976 ) 2021 remaster on 180g vinyl 2LP -‘Live At The Forum ’76’ was recorded during the band’s three-night run at the Los Angeles Forum in October 1976. The show took place as the group was putting the finishing touches on Hotel California, which would

(1976) - 2014 Rhino issue on 180g LP in gatefold sleeve =When the Eagles released Hotel California in 1976, their popularity reached a level that redefined superstardom, much as the album redefined the times. The classic release was a true phenomenon, sp

( 1975 ) 2014 EU reissue  180g vinyl LP - the 4th studio album from the esteemed band and the last to feature Bernie Leadon. Includes the classic track " Lyin Eyes " plus "Take It To The Limit" as well as the title track, presented in the original artwrok

EAGLES - On The Border

( 1974 ) - 2014 EU reissue on 180g VINYL= this 1974 album marked a transitional point between their original countryrock soundand the slick poprock they would later embrace, including the smash hit Already Gone and their cover version of the Tom Waits ba

( 2000 ) 2021 remaster on 180g vinyl 2LP - the 12-song set features Don Henley, Glenn Frey, Joe Walsh, Timothy B. Schmit and Don Felder performing at three year-end shows in Las Vegas and Los Angeles. These would be the last shows Felder would play with