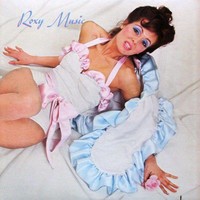 Roxy Music were a British art rock group formed in 1971 by Bryan Ferry, who became the group's lead vocalist and chief songwriter.
Rolling Stone magazine ranked Roxy Music No. 98 on its "The Immortals – 100 The Greatest Artists of All Time" list.

Their music was influenced by other British artists, such as The Beatles, The Rolling Stones, The Kinks, The Who, The Pretty Things, Pink Floyd, The Creation, The Move, Traffic, David Bowie, King Crimson, and Elton John, as well as American artists like Little Richard, Elvis Presley and The Velvet Underground.

( 1975 ) - 2017 EU reissue on standard LP-1975's Siren has a thematic consistency that works in its favor-including "Love Is The Drug",- "Sentimental Fool," "Both Ends Burning," "Just Another High",the album itself into the realm of classics.

2022 EU  issue on 180gram vinyl 2LP = Containing all of the classic singles including ‘More Than This’, ‘Jealous Guy’, ‘Love Is The Drug’ and ‘Virginia Plain’, and classic album cuts, it’s a definitive testament to one of the most influential and daring a