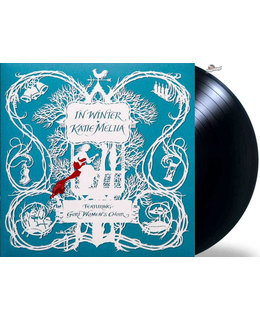 2016 EU issue on 180g LP = The singer is back on form with an edgy concept album, In Winter is a truly unique collection of songs centered around the theme of winter, performed by multi-award-winning recording artist Katie Melua, and featuring the as...

Recorded in her native country of Georgia (Melua left with her parents at age nine), In Winter is a lushly produced, thoughtfully conceived album featuring arrangements by esteemed choral composer Bob Chilcott. An acclaimed institution, the Gori Women's Choir are famous for their haunting classical harmonies. They prove a superb match for Melua, who both sings along with the choir and frames herself against its angelic, delicately layered harmonies. Although the album is technically a holiday-themed work, it's not a cheery collection of yuletide favorites. Instead, Melua delivers a handful of ruminative and lyrical originals, many inspired by her memories of growing up in what was then the Soviet Union, as well as the complex and often heartbreaking history of Georgia's civil war. She also weaves in several well-curated covers, including poignant renditions of Joni Mitchell's "River," Sergey Rachmaninov's "All-Night Vigil-Nunc Dimittis," and the hymn "O Holy Night." Melua even finds room to sing in Ukrainian, opening the album with a magical rendition of the traditional song "The Little Swallow," whose melody is better recognized to Western audiences as "The Carol of the Bells." These are warmly arranged, beautifully executed recordings that capture the stark, introspective beauty of a rural Eastern Europe in winter.


Tracks:
A1 The Little Swallow
A2 River
A3 Perfect World
A4 Cradle Song
A5 A Time To Buy
B1 Plane Song
B2 If You Are So Beautiful
B3 Dreams On Fire
B4 All-Night Vigil - Nunc Dimittis
B5 O Holy Night


The singer is back on form with an edgy concept album, In Winter is a truly unique collection of songs centered around the theme of winter, performed by multi-award-winning recording artist Katie Melua, and featuring the astounding voices of Gori Women’s Choir. Hailing from the city of Gori, Georgia (Melua’s country of birth), this distinctive 24-piece vocal orchestra brings unparalleled magic and warmth to ten festive and deeply personal songs, meticulously curated by Melua. Ranging from original works inspired by Melua’s childhood in Georgia, to new interpretations of traditional carols, the album features the arrangements of world-renowned choral arranger Bob Chilcott. In Winter opens with the traditional Ukrainian Carol introduced to the West as Carol of the Bells, and closes with a show-stopping rendition of O Holy Night. The album also features 4 brand new songs written by Melua, as well as a truly magnificent cover-version of Joni Mitchell’s festive classic, River.