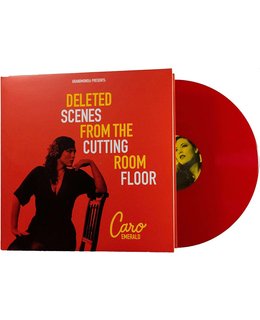 2015 repressing on vinyl 2XLP=debut album from the Dutch Jazz vocalist Caro Emerald is the new kid on the block but boy does she sound like shes been around A voice so seductive and sultry its hard to believe she just recorded her debut album a mix o...

2021 repressing on red vinyl 2xLP= debut album from the Dutch Jazz vocalist Caro Emerald is the new kid on the block but boy does she sound like she's been around. A voice so seductive and sultry its hard to believe she just recorded her debut album, a mix of 1950's inspired ballroom. Jazz cinematic Tangos groovin Jazz tracks infectious Mambos and banging beat,  all the music has a late 40s swing/early 50s club vibe to it plus sort of a Fatboy Slim kinda thing going on.

LP1:
A1 That Man
A2 Just One Dance
A3 Riviera Life Side

Caro Emerald came out of nowhere in 2009 with the summertime hit "Back It Up," a catchy jazz-pop song with a dance beat. The follow-up single, "A Night Like This," was an even bigger hit, topping the Dutch charts. By the time Deleted Scenes from the Cutting Room Floor came around, Emerald was well established as one of the most exciting new artists to emerge from the Netherlands in some time, and her full-length album debut was eagerly awaited. It includes the smash hit singles "Back It Up" and "A Night Like This," both written by Vincent de Giorgio, David Schreurs, and Jan van Wieringen. The latter two Dutchmen are Emerald's producers. They released Deleted Scenes from the Cutting Room Floor on their Amsterdam label Grandmono Records. In addition to the pair of singles, the album includes ten new songs quite varied in style. "Just One Dance" is straight dance-pop with dashes of jazz, and "The Lipstick on His Collar" draws from both Amy Winehouse circa Back to Black (2006) and Portishead circa Dummy (1994). "The Other Woman" is another song that brings to mind Winehouse and Portishead. Other songs like "Dr. Wanna Do" go heavy on the jazz. Emerald is a talented singer and she sings in English well, but in the end, the varied jazz-pop productions and the slick dance beats are what set her apart from the crowd. Fans of the initial singles should find plenty else to enjoy on Deleted Scenes from the Cutting Room Floor, which finds Emerald trying out a number of different jazz-pop styles.