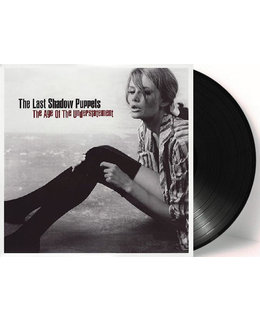 2008 EU issue on 180g LP+bonus download - The Last Shadow Puppets is the long awaited sideproject from Alex Turner (Arctic Monkeys) & Miles Kane (The Rascals), The Age Of The Understatement is an albumof 12 fullblooded songs bold and brassy full of d...

2008 EU issue on 180g LP+bonus MP3 download - The Last Shadow Puppets is the long awaited sideproject from Alex Turner (Arctic Monkeys) & Miles Kane (The Rascals), The Age Of The Understatement is an albumof 12 fullblooded songs bold and brassy full of drama wit and melody, that source the past but avoid falling into pastiche including the majestic singles The Age Of The Understatement & Standing Next To Me.

It's not that often that side projects are more ambitious than the players' main bands, but the Last Shadow Puppets, the collaboration between the Arctic Monkeys' Alex Turner and the Rascals' Miles Kane, is one of those rare birds. With their day jobs, Turner and Kane are revivalists of different strains of "angry young British man" rock, but with the help of drummer/producer James Ford (also of Simian Mobile Disco), arranger Owen Pallett (Final Fantasy), and the London Metropolitan Orchestra, on The Age of the Understatement they revitalize the lush, symphonic pop of early Scott Walker and David Bowie, when they needed an orchestra to express just how sweeping their feelings were. The title track's galloping strings-and-timpani drama begins the album, making it readily apparent just how ironic The Age of the Understatement's name is, and just how well the Last Shadow Puppets have recaptured that lavish late-'60s/early-'70s sound.
The main update to it comes from Turner and Kane's voices; stark and suave like Walker and Bowie they are not, but that's a good thing -- their boyish, unpretentious voices and brotherly harmonies keep the album from dipping into kitsch. Instead, a surprising urgency runs through The Age of the Understatement, most noticeably on the taut "Calm Like You" and "Separate and Ever Deadly," but also on softer moments like "The Meeting Place" and the extremely Walker-esque "My Mistakes Were Made for You." Whenever the drama threatens to become too monotonous, the band knows when to change things up: "I Don't Like You Anymore" brings in more of the Arctic Monkeys' spit and spite, building up to a livid guitar solo that practically shakes with loathing, while "Standing Next to Me" and "Time Has Come" rein in the bombast. Despite all the intensity, the Last Shadow Puppets have a light touch -- their songs are short and don't overstay their welcome, and the whole affair is just arty and indulgent enough to make it special. It's not an overstatement to say that The Age of the Understatement is a likable, accomplished working holiday.

London Grammar If You Wait ( 2LP )