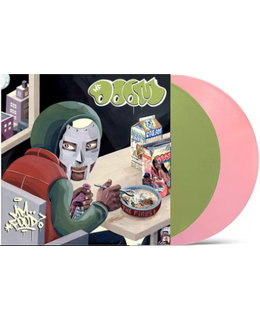 2022 EU repress on green & pink coloured vinyl 2LP =Daniel Dumile also known as MF Doom was always seen in his gladiator style metal face mask before his passing on October 31, 2020. The 15 track album Mm.. Food was originally released on November 16, 2004 and is an anagram of MF Doom. MF Doom named a majority of the songs on this project after food such as Kookies, Gumbo and Beef Rapp. The Limited Edition 2XLP Vinyl comes in an exclusive Pink and Green colorway.

MF Doom Super What? ( with Czarface )