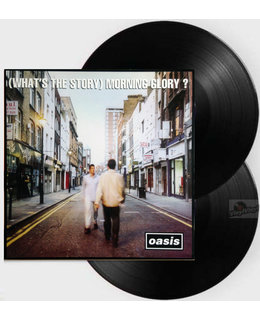 ( 1995 ) - 2014-2022 reissue on vinyl 2LP+download-including the hit singles Roll With It," Wonderwall, " "Don't Look Back In Anger" and "Champagne Supernova," Some Might Say Also includes high quality download code for B-sides,

2014/2022 reissue on vinyl 2LP- This new 20th anniversary set has been meticulously remastered from the original 1995 half inch tapes by Ian Cooper at London’s Metropolis Studios, supervised by the album’s producer Owen Morris.

If Definitely Maybe was an unintentional concept album about wanting to be a rock & roll star, (What's the Story) Morning Glory? is what happens after the dreams come true. Oasis turns in a relatively introspective second record, filled with big, gorgeous ballads instead of ripping rockers. Unlike Definitely Maybe, the production on Morning Glory is varied enough to handle the range in emotions; instead of drowning everything with amplifiers turned up to 12, there are strings, keyboards, and harmonicas.

Highlights of the download bonus content include:
• Previously unheard demos of "She’s Electric" and "Rockin’ Chair" recorded at Mark Coyle’s Manchester studio. Demos of "Some Might Say," "Hey Now" and "Bonehead's Bank Holiday" recorded by Mark Coyle for the first time at the band’s soundcheck, Club Quattro in Tokyo in September 1994.
• Live recordings from legendary gigs such as Knebworth House, Maine Road Stadium, Earls Court and Bath Pavilion.
• All of the Morning Glory singles and acclaimed B-sides including "Talk Tonight," "Acquiesce," "The Masterplan" and "Underneath The Sky"