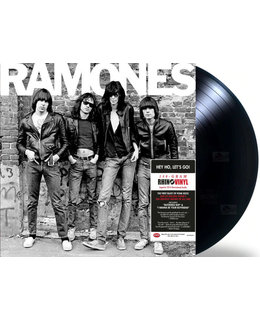 Tracks:
A1 Blitzkrieg Bop
A2 Beat On The Brat
A3 Judy Is A Punk
A4 I Wanna Be Your Boyfriend
A5 Chain Saw
A6 Now I Wanna Sniff Some Glue
A7 I Dont Wanna Go Down To The Basement

Ever since they rocketed out of Queens in 1974, the Ramones have inspired countless kids worldwide to pick up guitars and rock. Bringing a bubblegum sensibility to the fast-and-hard mentality, their primal sound is considered a blueprint for all things resembling snotty, catchy, ear-bleeding punk rock.

This is the album that started it all! Recorded in around a week for a little over $6,000, the Ramones self-titled 1976 debut is loud, fast, hook laden and unadorned, all characteristics that help make it arguably the best and most influential album to come out of New York's heralded '70s punk scene. With tracks like "Blitzkrieg Bop," "Beat on the Brat," "Judy Is A Punk" and "I Wanna Be Your Boyfriend," for its first four songs, it's hard to argue otherwise.